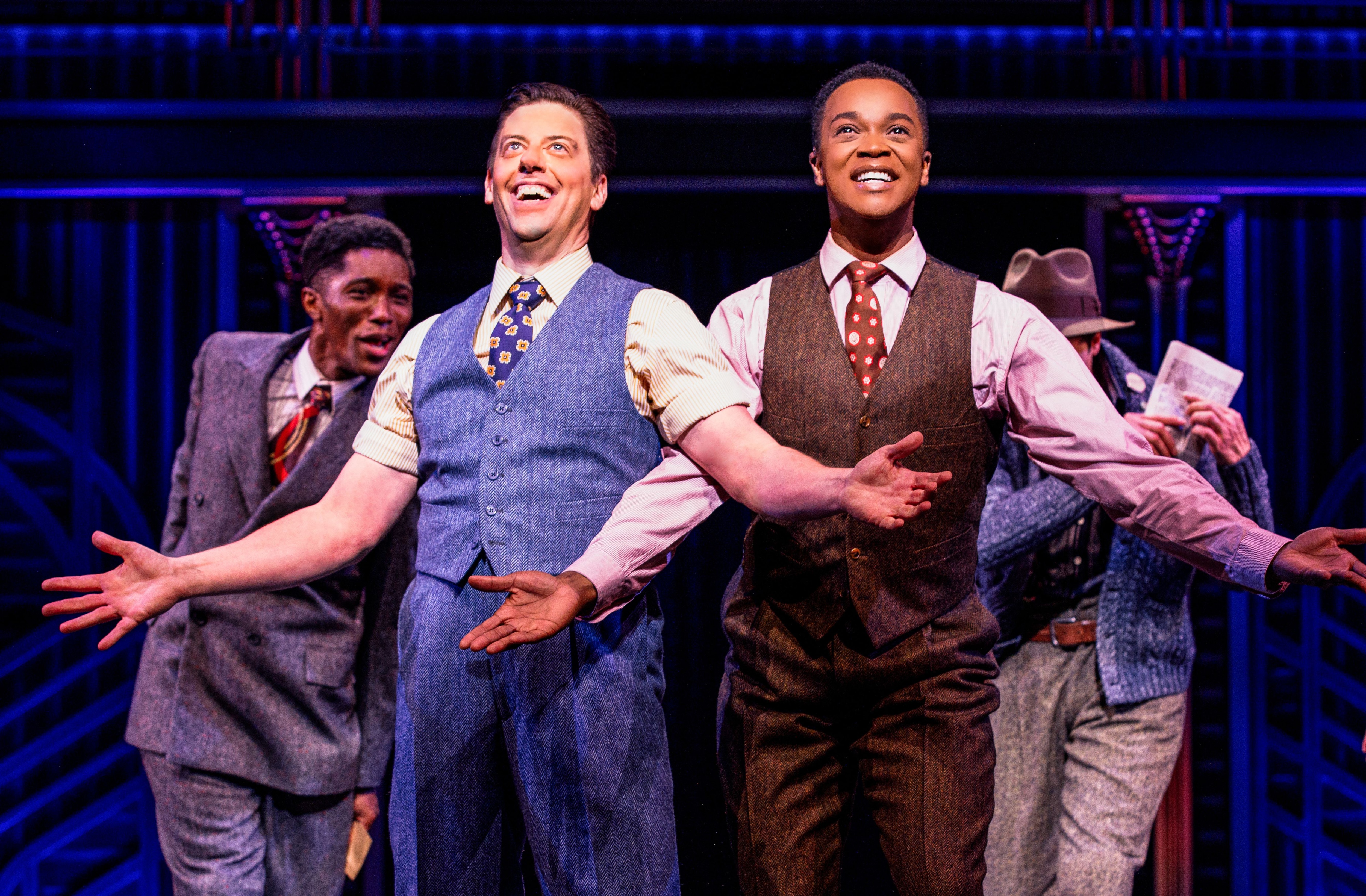 NEW YORK — The new musical version of “Some Like It Hot” roars along like the 20th Century Limited, racing from rumba to samba and jive to paso doble, its book unfurling with breakneck zestiness and its fleet-footed dancers and singers speeding so fast from one transition to another that it feels as if someone has lit a fuse and the Shubert Theatre is set to burst into flames every night at 10:30. Imperative for everyone to get out alive!

That’s also true, one suspects, of how the creative artists were first feeling when faced with the task of musicalizing not only one of the most famous movies of the 20th century as directed by Billy Wilder and starring Marilyn Monroe, Tony Curtis and Jack Lemmon, but at least the third in a series of movie-to-musicals that have featured a plot involving cross-dressing: “Tootsie,” “Mrs. Doubtfire,” and now

“Some Like It Hot” features a book by Matthew López and Amber Ruffin, music by Marc Shaiman and lyrics by Scott Wittman and Shaiman and the ebullient choreographic and directorial stylings of Casey Nicholaw.

The first two titles on that list came in for some criticism, not the least being that the central, white male character was assuming a female persona merely to get what he wanted. In many ways, “Some Like It Hot” was an easier assignment for the stage, given that there were so many gender-subversive and homoerotic themes (”Nobody’s perfect”) in a film that offers a veritable sweaty banquet of human sexuality, a romp in all the best senses of the word.

Still, there are plenty of modern-day minefields in the Prohibition-era story of musicians Joe (Christian Borle) and Jerry (J. Harrison Ghee), goofy witnesses to a Chicago gangland hit who run from the mob by putting on dresses and joining an all-woman band, Sweet Sue and her Society Syncopators, headed by train to Miami.

Romantic complications ensue, many of which involve the guys forgetting they are supposed to be women and thus can’t keep offering to be the teaspoons for the band’s singer, Sugar.

The gently anachronistic musical makes numerous changes, the most significant of which is that Jerry is now Black — and who eventually finds that living as a woman works so well for him that he decides to keep it that way, which does not faze Kevin Del Aguila’s Osgood, now a sweeter soul.

Sue (NaTasha Yvette Williams) and love interest Sugar (Adrianna Hicks) are Black performers too (Sue‘s role is amped up), and the multiracial band doesn’t head south to Miami but instead through Iowa for a “sit-down” in San Diego, which is where the climactic hijinks occur.

It’s as if a group of people sat down and wrote out all the potential modern-day objections to the movie from the creative community (audiences tend to worry less) and then figured out a way to assuage them.

For the most part, the changes are smart, especially those that make the story more inclusive and jettison Hollywood’s shameful tendency to gaslight Black musicians. Williams, in particular, is fabulous in her beefed-up role and Hicks gets the chance to belt out some knockout numbers. Borle and Ghee, both consummate, eminently likable pros, have a fun, genial rapport and the book offers some good laughs.

That said, if you’re translating the word “hot” in the title as complex sexual desire, which is what the movie wanted you to do, then know that the musical occupies a very different place. The show hardly bristles with eroticism; indeed, it runs afeared thereof.

That’s actually a problem endemic to Broadway at present: musicals have long sold sexuality to the punters in the seats, all coughing up their cash and looking for a sensual escape from their boring suburban or hinterland lives. Like so many of the new musical comedies, “Some Like It Hot,” of all titles, sees that realm as, well, the kind of risk it does not want to take and thus none of these characters seem especially attracted to each other. Rather, they all have their preordained roles in this carefully wrought world and they play them very well.

There is considerable irony in how the film actually was an example of the power of subversion of a dominant culture, striking a blow against the conservatism of the age. Musicals now seem to feel they have to toe the party line. The key to Broadway’s future, frankly, will be finding a fertile middle ground here, and retaining that all-important spark of danger and risk.

Without it, there is no surprise, intellectually or emotionally, and that is the case here, even though that original film was full of shocks and wonders.

You can actually hear the musical saying that it chooses to pass on some of the trickiest issues of the day in one of the numbers: “When the noise from politicians tries to lead all our hopes astray,” it sings. “Just elect only swing time musicians, let’s dance the world away.” And so indeed they do, even if the individual stars don’t fully pop.

Performed on a set from Scott Pask that evokes Hollywood’s Golden Age, “Some Like it Hot” is the work of inestimably skilled Broadway craftspeople.

And of all Shaiman’s wonderful past musical scores, this is the one that most celebrates the big band era — the levels are high, the joint gets musically pumping, the harmonics are lush and Nicholaw’s grand dancers commit to every kinetic moment. The music, at least, is red hot and jumping.

“Some Like It Hot” is at the Shubert Theatre, 225 W. 44th St., New York; somelikeithotmusical.com