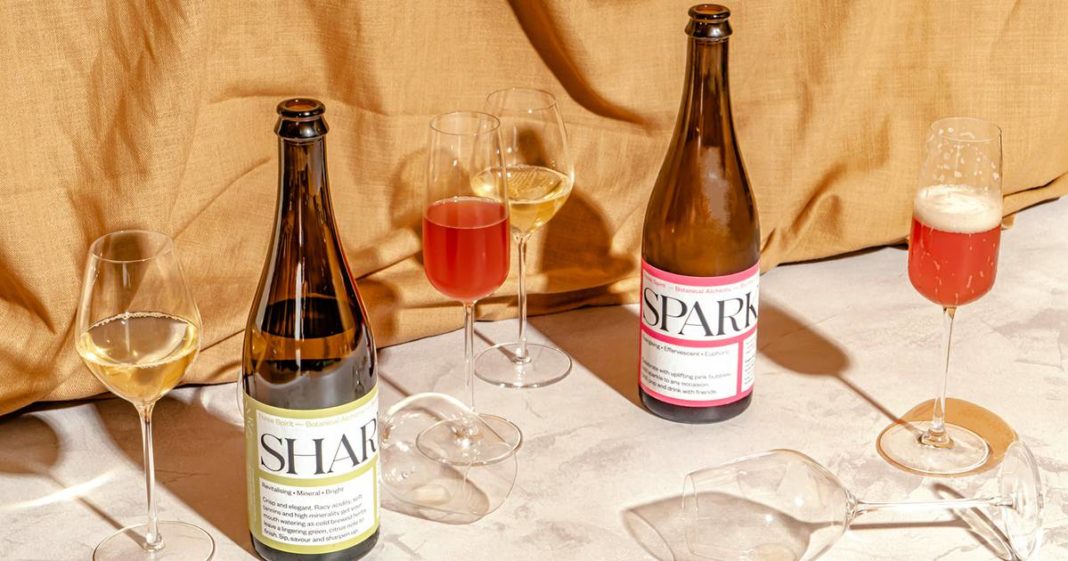 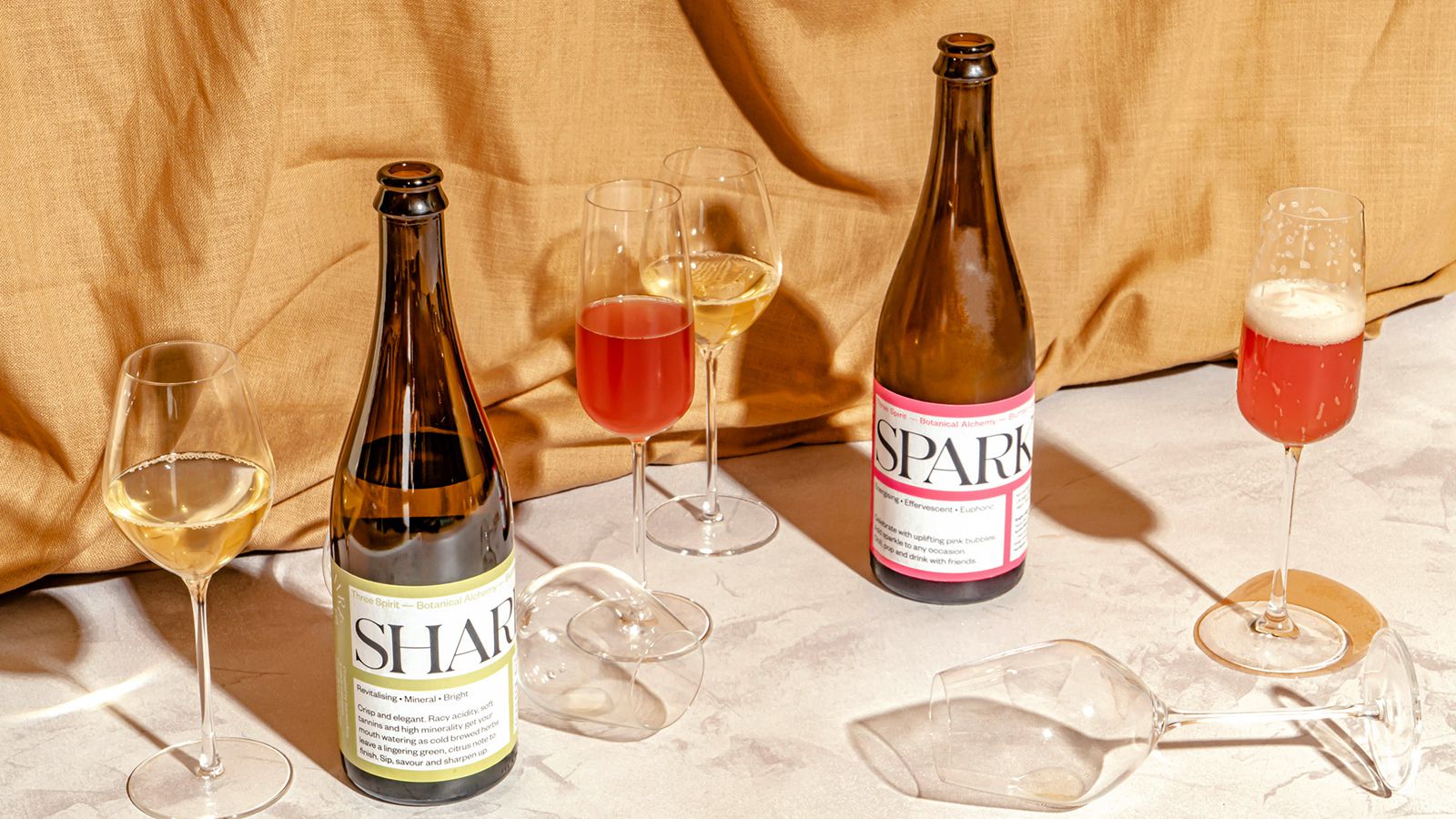 Ever since Seedlip hit the market in 2015 with the world’s first distilled nonalcoholic spirit, the producer’s success has proven that many want to drink, but not everyone wants to get tipsy. Now an influx of beverage brands are jostling for space in restaurants and on store shelves.

Nonalcoholic beverage sales are jumping in the U.S. as more people prioritize healthier lifestyles and millennials feel less social pressure to drink. In the year ending in August 2022, nonalcoholic drinks sales hit $395 million, a year-over-year growth of 20.6%, according to NielsenIQ. The wine category was up 23.2% in that time period, to be worth more than $52 million; booze-free spirit sales grew 88.4% from the previous year.

Exhibit A is the rapid success of the nonalcoholic drinks shop Boisson. It opened during the pandemic as a storefront in Brooklyn, New York, and in less than two years, co-founder Nick Bodkins has expanded his booze-free brand to eight brick-and-mortar shops spread between there and Los Angeles. In addition to selling more than 100 unique premium nonalcoholic drinks, Boisson also sells its own namesake wine label.

Boisson Blanc tastes just like a floral, high-acid white wine; you’d be hard-pressed to guess that it’s alcohol-free. Bodkins teamed with German-based winemaker Johannes Leitz. He says Leitz “goes through the traditional winemaking process” and then de-alcoholizes it at a low temperature, in a vacuum, to make it zero-proof. The result tastes remarkably like wine, as opposed to most overly sweet alcohol-free wines.

That’s just one of the innovative techniques that nonalcoholic producers employ. Another trend is to spike drinks with adaptogenic herbs — supporting the immune system by helping the body adapt to stress — to produce new beverages with healthful benefits.

Just in time for Dry January, here are the best new faux wines, cocktails and liquors to seek out.

For an alcohol-free wine, Boisson tastes an awful lot like a classic riesling. Bodkins, co-founder of the bicoastal nonalcoholic boutique brand Boisson, tapped the winemaker behind Weingut Leitz, to create this floral, high-acid white, made from a blend of grapes grown in Germany’s lauded Rheingau wine region. $16 for 750ml

Consider this a booze-free lambrusco. Tart and spicy, with a leathery backdrop, the sophisticated, crimson-hued sparkler blends ingredients such as sour cherry, cold-brewed coffee and garam masala to mimic the acid, tannins and spice found in some red wines. Founder Aaron Trotman created his Non alcohol-free drinks line three years ago in Australia. Each “varietal” is designated by a number. Earlier in December, they became available in the U.S. $29 for 750ml

Like any good rosé, this bottle is extremely easy to sip. The pretty pink drink has notes of grapefruit and juicy strawberry, and white tea adds body. It embodies summer, although, like all rosés, it’s good year-round. If you’re going for a pairing, try this refreshing drink alongside fish or vegetable-focused dishes. $150 for six 750ml bottles

Capped with a wire cage enclosing its cork, you could easily mistake this 2019 vintage bubbly for Champagne. But the single-varietal sparkling white is produced at Diez Siglos winery in northern Spain using the area’s most famous grape, verdejo. The vinified wine is de-alcoholized via vacuum distillation to yield an almondy and lemon-forward booze-free alternative to cava. $36 for 750ml

This deep pink-hued, strawberry and red currant-flavored rosé Champagne alternative does double duty as a “functional beverage.” Its energy-enhancing capabilities come thanks to the addition of guayusa — caffeinated leaves from a tree native to the Amazon that are brewed as a tea — and endurance-supporting schisandra berry, though it also works well as an alcohol-free elixir. $27 for 750ml

This handsome bottle contains a multidimensional, well-balanced mocktail that tastes like a margarita crossed with a Moscow mule. The exotic, flowery notes come from the addition of Sichuan peppercorn and lychee. Founders Mariah Wood and Vanessa Royle set out to create a spirit-less drink that lives up to special occasions. It starts shipping in January. $29 for 750ml

Tequila fans, this one’s for you. After spending a decade working at the booze conglomerate Diageo Plc, Parch’s co-founder Ila Byrne branched out in a cleaner direction with her adaptogenic canned mocktail line, which is spiked with immune-supporting plants such as ginseng and ashwagandha. The agave-based Paloma cocktail riff swaps tequila for blue weber agave nectar and blends jicama and prickly pear juice, along with citrus. Find some tacos to serve with it. $44 for eight 8.4-oz cans

These cute canned drinks rely on three Pacific Northwest-grown hops varieties — the plant that brewers add to beer to impart a bitter taste — for their floral flavor. But this newly released booze-free spritz omits bitterness and instead offers flowery notes of grapefruit. $21 for six 12-oz cans

Aperol and Campari spritz fans, rejoice. The unofficial drink of summer is now available, alcohol-free. Wilderton founding distiller Seth O’Malley’s obsession with Italian botanical spirits led him to create this drink that tastes like beloved aperitifs as well as sweet vermouth. Bittersweet notes of orange and grapefruit combine with a botanical blend including gentian, bay leaf and sandalwood. $37 for 750ml

You could build an entire booze-free bar with the Australia-based Lyre’s, a brand that produces myriad mock spirits including absinthe and dark rum. The company has already won several beverage awards for those products; now founders Mark Livings and Carl Hartmann have introduced the first drink meant to be sipped neat: a woodsy, cereal- and toffee-flavored Highland-inspired malt whiskey. $36 for 700ml

Hemp & Root from the Pathfinder

Hendrick’s Gin brand creator Steven Grasse, Diageo alum Guy Escolme and cannabis vet Chris Abbott have teamed up to produce this amaro-inspired cannabis-based spirit. They add a blend of angelica root, wormwood, saffron and more into a distilled hemp base to yield an herbaceous (although not psychoactive) bittersweet elixir. $40 for 750ml