Prince Harry learns to cry, and takes no prisoners, in ‘Spare’ – Chicago Tribune 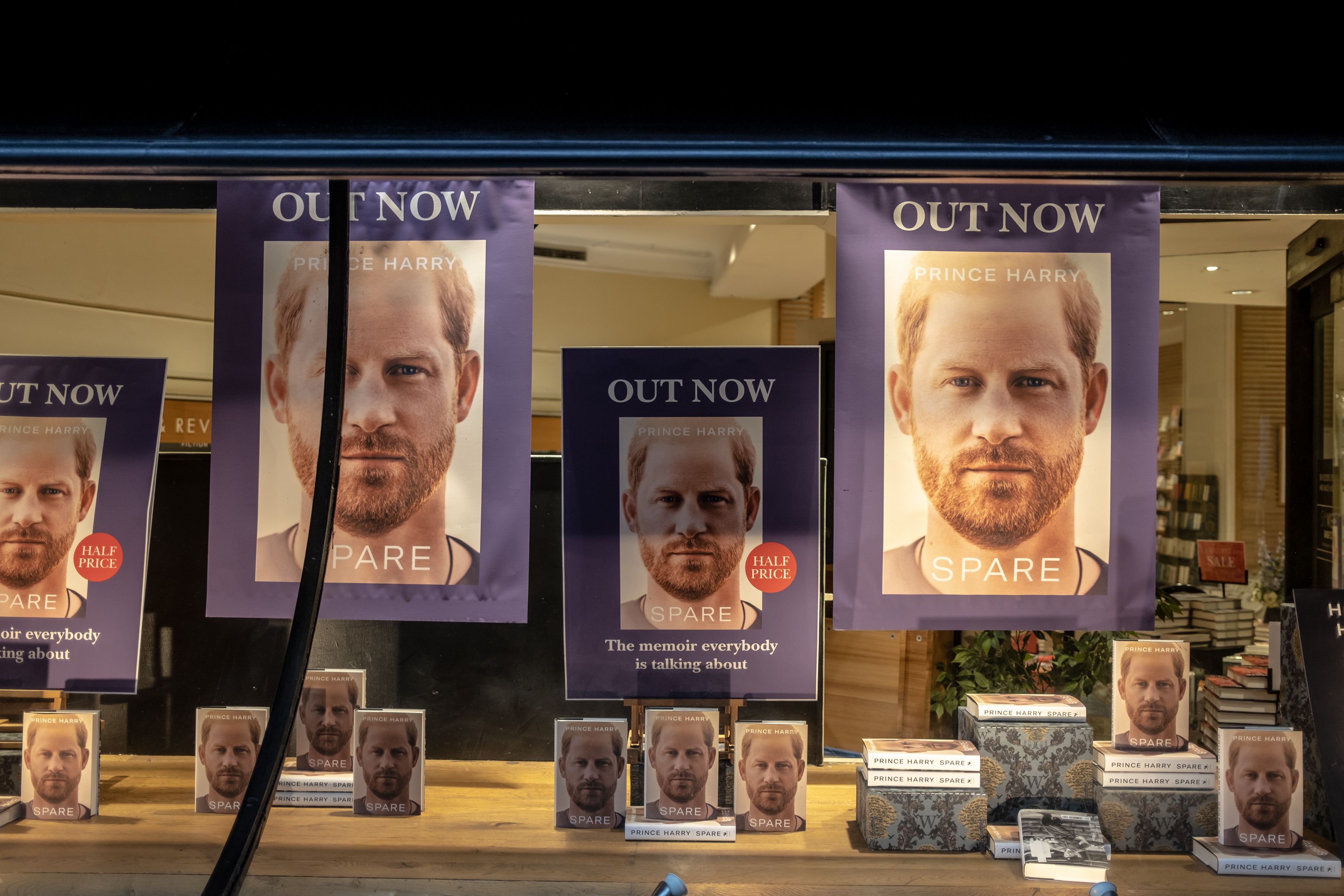 Prince Harry, the Duke of Sussex and Man About Montecito, isn’t one for book learning, he reminds readers of his new memoir, “Spare.” And yet its pages are dappled with literary references, from John Steinbeck (“He kept it tight,” the prince writes admiringly of “Of Mice and Men”); to William Faulkner, whose line from “Requiem for a Nun” about the past never being dead, nor even past, he discovers on BrainyQuote.com; to William Wordsworth and other poets. Shakespeare’s “Hamlet,” though, hit a little too close to home. “Lonely prince, obsessed with dead parent, watches remaining parent fall in love with dead parent’s usurper…?” Harry writes. “No, thank you.”

He prefers to sink into TV comedies like “Family Guy,” where he admires Stewie, the unnervingly mature baby, and “Friends,” where he identifies with the tortured Chandler Bing. Reading “Spare,” though, one kind of wants to snatch the remote control from his hands and press into them a copy of Joseph Heller’s “Catch-22″ — not because of Harry’s military endeavors (unlike Yossarian, he seems to have felt sane only in active combat) but because of the seemingly inescapable paradox of his situation.

In the prince’s full-throated renunciation of fame and royalty, with all its punishing invasions of privacy, he has only become more famous, if not more regal, trading his proximity to the throne for the No. 1 spot on cushioned chairs opposite Oprah Winfrey and Anderson Cooper. With “Harry & Meghan,” the gauzy Netflix series preceding this book, he and the Duchess now might well be overexposed. (Maybe this is part of the grand plan, to drive away inquiring minds by boring them to bits?)

My interest in the English royal family tends to dwindle after the era of previous renouncers like Edward and Wallis and the dynamically dysfunctional Princess Margaret, who “could kill a houseplant with one scowl,” Harry writes. They weren’t close; Margaret once gave him a cheap pen wrapped with a rubber fish for Christmas. I devoured early episodes of “The Crown,” but Season 5, with its focus on then-Prince Charles and Princess Diana’s marital troubles, left me delicately yawning.

Still, I expected to enjoy “Spare,” given that it was written with the help of the talented author J.R. Moehringer, whose own memoir, “The Tender Bar,” I adored before it was even a glimmer in Ben Affleck’s eye, and who helped tennis star Andre Agassi’s autobiography, “Open,” transcend the locker room. And I did — in parts.

“Spare” — its title as minimalist as Agassi’s; its cover a similar full-frontal stare — is a thing of many parts, of shreds and patches, of bitter gibes (particularly at Harry’s older brother, William, the “heir” to his “spare,” whom he calls “Willy”) and sustained existential crisis. Its basic three-act structure of childhood, Army service and wedded bliss is as subdivided as a California lot into shorter episodes and paragraphs, many only one sentence long.

Harry’s distinctly English voice (he doesn’t like kilts, for example, because of “that worrisome knife in your sock and that breeze up your arse”) at times does weird battle with the staccato patois of a tough-talking private eye doing voice-over in a film noir. Describing his “Gan-Gan” at Balmoral: “She wore blue, I recall, all blue … Blue was her favorite color.” Then, like a gun moll, the Queen Mother orders a martini.

If there’s a murder that Harry is trying to solve, it’s of course that of his own mother, Diana, whose death in the Pont d’Alma tunnel in 1997, under chase by paparazzi, is the defining tragedy of his life and thus of this book. To her younger son, only 12 at the time, the click of cameras wielded by paps, as he derisively calls them, came to sound “like a gun cocking or a blade being notched open.” (From the looks of “Harry & Meghan,” which has plenty of sanctioned shots of the couple’s courtship and toddlers, he is fighting back by hand with his own iPhone.) Diana defended herself against the constant onslaught of photographers by lobbing water balloons and, more sinisterly, by hiding in the trunks of getaway cars, a trick that Harry eventually picked up. “It felt like being in a coffin,” he writes. “I didn’t care.”

Mired in a “red mist” of grief and anger, the prince self-medicates at first with candy and then, as the hated tabloids report with varying degrees of accuracy, alcohol, weed, cocaine, mushrooms and ayahuasca. (More mildly, he tries magnesium supplements, and I’m not sure anyone needs to know that this loosened his bowels at a friend’s wedding.)

Along with Harry’s deployment to Afghanistan — where, he observes, “you can’t kill people if you think of them as people” — he escapes repeatedly to Africa, whose lions and tigers seem less threatening than the journalistic predators at home. In one of the book’s cringier moments, he writes that Willy, who calls him Harold though his given name is Henry, stamps his foot over choosing the continent as a cause. “Africa was his thing,” Harry explains, mimicking his brother’s petulant tone. “I let you have veterans, why can’t you let me have African elephants and rhinos?”

Cattily, he notes Willy’s “alarming baldness, more advanced than my own,” while dinging the Princess of Wales for being slow to share her lip gloss. Candidly, he shows Charles doing headstands in his boxer shorts and his family’s charade of an annual performance review: the Court Circular.

Like its author, “Spare” is all over the map — emotionally as well as physically. He does not, in other words, keep it tight. Harry is frank and funny when his penis gets frostbitten after a trip to the North Pole — “my South Pole was on the fritz” — leaving him a “eunuch” just before William marries Kate Middleton. In an odd feat of projection, he gives the groom an ermine thong at the reception, then applies to his own nether regions the Elizabeth Arden cream that his mother used as lip gloss — “‘weird’ doesn’t really do the feeling justice” — and worries that “my todger would be all over the front pages” before finding a discreet dermatologist.

Therapy, in which he claims William refuses to participate, and a whiff of First by Van Cleef & Arpels, help Harry learn to cry, unlocking a stream of repressed recollections of Diana, and that’s when even the most hardened reader might herself weep. Charles’ own scent, Dior’s Eau Sauvage, and his marriage to Camilla leave Harry relatively cold.

And yet when his father advises of the unrelenting and often racist press coverage of Harry’s union to Meghan — “Don’t read it, darling boy” — it’s difficult not to agree. The prince claims to have a spotty memory — “a defense mechanism, most likely” — but doesn’t appear to have forgotten a single line ever printed about him and his wife, and the last section of his tell-all degenerates into a tiresome back-and-forth about who’s leaking what and why. Maybe a little more Faulkner and less Fleet Street would be helpful here?

Still bitter over the late author Hilary Mantel, unnamed here, comparing the royal family to pandas — “uniquely barbarous” and dehumanizing, he writes, while admitting “we did live in a zoo” — Harry then turns right around and calls three courtiers the Bee, the Fly and the Wasp. He seems both driven mad by “the buzz,” as the royals’ inexhaustible chronicler Tina Brown would call it, and constitutionally unable to stop drumming it up.

This article originally appeared in The New York Times.