In Broadway’s “The Collaboration,” a beautiful blend 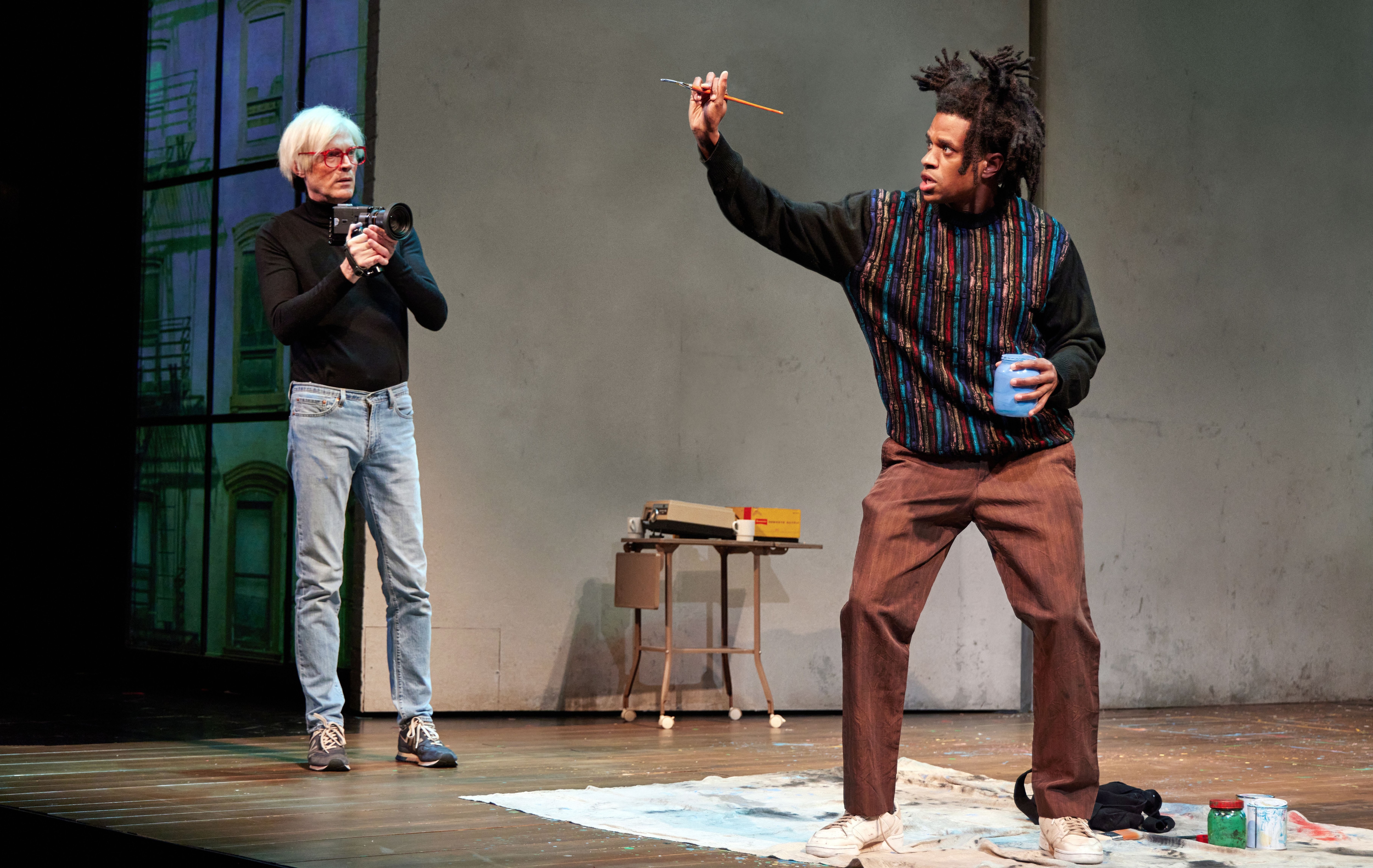 NEW YORK — What would the great American artist Jean-Michele Basquiat have achieved, how famous would he now be, had he not died of a heroin overdose in 1988 at the age of 27?

A moot question, for sure, but very much one that hangs over “The Collaboration,” the interesting new Broadway play by the prolific Anthony McCarten, capably directed by Kwame Kwei-Armah, and staged by the Manhattan Theatre Club.

That’s mostly because the actor Jeremy Pope depicts the neo-expressionist artist, a genius who was part of the Whitney Biennial at 22 years old and whose paintings now sell for hundreds of millions, with such tenderness and empathy.

Pope’s fascinating performance here, which is not showy but ranges deep, deftly captures an artist whose work was suffused with paradox: inner feeling versus outer reality, clarity versus obfuscation, reality versus hallucinatory invention. There is a real sweetness to Pope’s work, a level of insight that allows you to see the vulnerability of youth, the flashes of sweet joy, as well as the often fatal struggles familiar to most anyone whose prodigious talent means they get too much, too soon.

As the title suggests, “The Collaboration” focuses on Basquiat’s period of working closely and collaboratively with Andy Warhol, as quizzically and amusingly played by Paul Bettany, who treads lightly and wisely through a tough assignment given all of the pre-existing Warholian preconceptions.

The two artists, who died in strikingly close proximity to each other, had become good friends in the 1980s, with Warhol becoming Basquiat’s landlord and, on some strange level, his designated adult. Warhol wrote often about Basquiat in his diaries and the two partied with Mick Jagger and his ilk in the downtown scene. When Basquiat woke up to the reality of the morning, it was either his girlfriend or often Warhol who opened the curtains. (Krysta Rodriguez is excellent as Maya, Basquiat’s girlfriend, but the character is underwritten.)

There’s a whole sub-genre of plays out there at the moment that are using the art world when the playwright really wants to talk about what is going in the American theater, and “The Collaboration,” which arrives in New York from London, falls into that category.

Therein, McCarten gets to debate attacks on artistic freedom, the importance of allowing artists to do what they feel called to do, not what is politically correct, and the close relationship between great art and unchecked impulses. It’s a not-so-veiled attack on Broadway censoriousness and racially charged reductivism — and fair enough.

And given that Warhol is involved, “The Collaboration” is also an exploration of the commerciality of art (given that McCarten also wrote the book to the Neil Diamond musical “Beautiful Noise,” it no doubt is an area of interest to the writer).

Fair enough, again. After all, the actual Warhol-Basquiat collaboration came at the behest of Bruno Bischofberger (Erik Jensen), a self-interested Swiss art dealer and Warhol, of course, was famously interested in advertising, branding and industrial design. That allows McCarten to explore the various arguments for intersecting with stuff designed primarily to make money. On the one hand, you have Warhol being unfazed by Campbell’s soup cans and duplicability; on the other, you have Basquiat insisting that great art must come from the depth’s of the artist’s psyche.

Warhol, of course, loved to document process; Basquiat saw that as one more intrusion and impediment. But to some degree, Warhol’s gentle, open-hearted humanism won him over. As was true of so many.

A decent vehicle for two superb actors, “The Collaboration” is not some gorgeously poetic drama, nor does it offer new revelation for the ages, nor a feast of formative risk-taking. There always is a sense that you’re watching a skillfully constructed work where the author is taking two real-life figures and bending them to the themes he wants to talk about rather than letting them dictate the content. You might say the writer plays a role here not unlike Bischofberger in the 1980s.

But without such figures, where would the art world be? And where would Broadway be, other than closed?

After all, even those “anti-capitalist” plays still conform to an established brand. And no artist ever should be obliged to stick to reality.