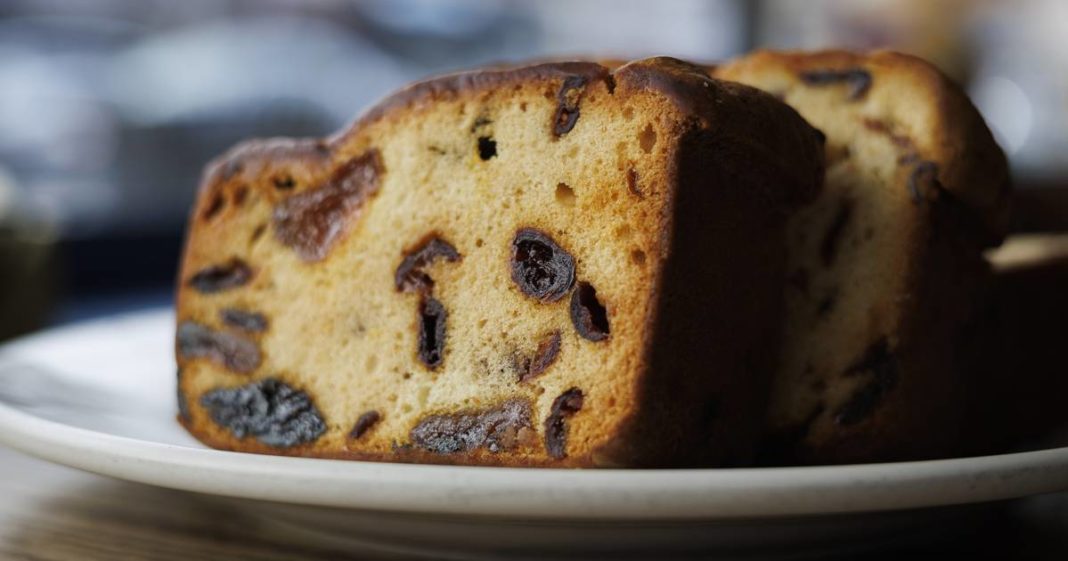 
Although not as bad as getting a lump of coal in your stocking, fruitcake may be considered one of the more undesirable items people receive during the holiday season.

The notoriously dry dessert made with dried or candied fruits such as pineapple, cranberries and apricot is usually the butt of Christmas jokes of doorstop repurposing or future regifting.

But for Dan McCauley, owner of A Taste of Heaven bakery and devoted fruitcake evangelist, the holiday delicacy gets way more ridicule than it deserves. For nearly three decades, he’s been spreading the gospel of good fruitcake, offering his own “actually edible” version at his Andersonville bakery.

And it seems to be working.

McCauley’s version is light in color, similar to a pound cake, and the fruit is cut in distinguishable chunks, rather than minced. It’s moist enough to not require soaking in rum or brandy, and popular enough to have customers place their order as early as Halloween.

McCauley said he had his own share of unpleasant experiences with fruitcake starting at the age of 6. When his mother worked at Sears Roebuck, the company would gift employees holiday fruitcake — and his father would try to salvage the bricky dessert with a generous brandy infusion.

“So basically it was a dry cake soaked in liquor,” McCauley said. “It had these bright green candies and bright red cherries with all these other anonymous fruits.”

To keep from wasting food, the family would reluctantly pick at the unwanted loaf while “making faces one usually reserves for sewer smells.”

Fruitcake became a traditional holiday gift in the United States starting in the 1950s (a time of many questionable holiday dishes), but its origins can be traced back to ancient Romans, Egyptians who left it in front of tombs as food for the afterlife, and 16th century European preservation methods. Over time, variations began to proliferate, from Italian panforte to Caribbean black rum fruitcake to German stollen.

But that notion began to shift for McCauley in the 1980s, when he worked at Printer’s Row restaurant. Michael Foley, the pioneering chef and owner, called his fruitcake a fruit taurine. The dessert was layered with buttercream and contained kiwi, strawberries and star fruit.

“It looked like stained glass when you cut into it,” McCauley said.

When McCauley began preparing his own cakes a decade later, he made sure the fruits, including apricot, cranberries and grapes, could be seen easily. He swapped out candied fruit for macerated dried fruit for a more natural taste.

The tricky part, he said, was trying to find a way to keep the fruit from sinking to the bottom of the cake.

The three-hour process can be a “drag,” McCauley said, as the tedious process of assembling and baking can get monotonous during his busy holiday season.

“You have to cook the fruit first, and then it has to chill before you bake,” McCauley said. “My advice to anyone who wants to bake is to do everything in stages.”

On average, McCauley said he bakes 12 cakes at a time.

“The fruit should stay suspended throughout the batter,” McCauley said. “If you overmix it, the fruit will sink to the bottom.”

But to him the process is worthwhile, not only for changing people’s minds about the much-maligned dessert, but also to be sharing something he loves with the “supportive and tight-knit community” of Andersonville.

“It’s like a small town up here,” McCauley said. “Everyone knows you can get your fruitcake here.”

For those who have not yet been to A Taste of Heaven, McCauley said their “small little bakery” sells fruitcake by the loaf for $47.50 until the first week of January.

“I like to say we are trained to deal with people who have a fear of fruitcake,” McCauley said. “We are here to support you.”